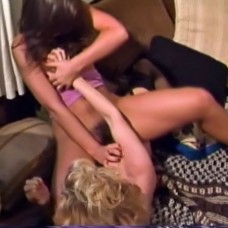 This battle begins with black-haired beauty Dianne entering Sherri's abode with vengeance in mind.  An argument starts over "George" and soon the bedroom becomes a battleground as Sherri soon is down to her lace bra.  The fight ends with a helpless amazon lying beaten and battered on the bed.

SV-30   "SAND WITCHES"   (44 minutes)
This all-nude release shows three glorious battles between all five of our "Savage" sweeties.  Never in the history of this type of fighting has the action ever been captured in so precise and close-up of character.  You'll marvel at the DVD and the violence of the participants.
In the first scene, beautiful Beth is seated at a table in a turquoise playsuit and is being waited on by new blonde Leslie, in a cute candy-striped top.  An argument ensues over"Bob" the boss, and Leslie dashes for open ground as she is followed by an enraged Beth.  The sandy spot in the garden becomes a torture pit as a true girl's fight breaks out with biting and hair pulling.  Spine tingling chokes punctuate the action as sand attaches itself to the beautiful bodies.  Breasts are bitten and squeezed until one combatant lies helpless in the sand, crying her eyes out.
The second battle shows black-haired beauty Dianne entering Sherri's abode with vengeance in mind.  An argument starts over "George" and soon the bedroom becomes a battleground as Sherri soon is down to her lace bra.  The fight ends with a helpless amazon lying beaten and battered on the bed.
The DVD ends with another beach brawl as Leslie saunters up the beach in a black bikini and spreads her towel for an afternoon in the sun.  Soon another blonde, Melanie is seen running up the beach in her long khakis and tee shirt.  They start to argue over a common boyfriend. Both blondes wrestle each other to the burning sand and bear hugs soon give way to the yanking off of tops and brutal hair pulling.  They soon rise and run topless to the ocean as if the blue water would offer refuge from each other's onslaught.  Soon, they are back in the middle of the beach, completely nude, rolling body-to-body and breast-to-breast.  Then a smiling winner smashes the loser's face in the sand as a savage bow-and-arrow hold finishes the tormented loser.  An exciting sexy and erotic DVD to add to your collection.