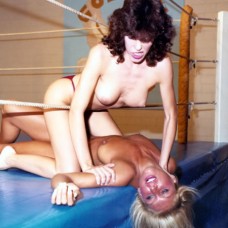 Red outfitted Kelly tangles with tough blonde Shelly in a choke filled topless tangle that will leave you breathless in its ferocity.

GGC-102   "FATAL FE M M ES"   (61 minutes)
Another four match spectacular of over an hour's worth of the finest and sexiest battling ever, with three more topless battles.  The first match features blue bikinied Spice in a brutal battle with the voluptuous blonde star of our last supplement, the beautiful Renee.  In her candy striped bikini, Renee may as well be topless, for no ordinary top can hide the huge mammaries that belong to this tiger.  These two athletic and beautiful girls show you many pro moves, as first one girl and then the other gain advantage.  You can feel the animosity in the middle of the ring, as these two strongest girls in our stable clash for supremacy.
After this classic bout you will be treated to three of the wildest topless melees you will ever see.  Red outfitted Kelly tangles with tough blonde Shelly in a choke filled topless tangle that will leave you breathless in its ferocity.
Then huge busted Connie finds out that blue bikinied Terri is really a feline animal in disguise.  Teri's bare breasted brutality surprises Connie and the large chested one strikes back to shock the beautifully athletic newcomer. Wait to see this finish!
Our fourth bout features blonde Debbie, in a chain outfit with demure Jill, in a white wrap bikini.  The dominant Debbie is out to destroy the petite but well built brunette, but is soon bare to the waist herself.  A shocking end to this match occurs when the loser is bare-assed as well in a super humiliating ending.  Four action packed sexy matches by the most beautiful and fit girls in wrestling.