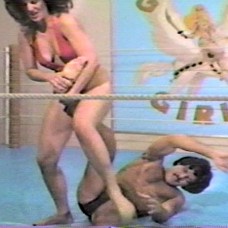 This match is between Spice, attired in a red French cut suit and handsome Ralph. You will be amazed at Spice's knowledge and domination.

GGC-3&28   "BOY-vs-GIRL"   (64 minutes)
For mixed match fans -- The first match is between Spice, attired in a red French cut suit and handsome Ralph. You will be amazed at Spice's knowledge and domination.
The second match features Leslie and Kurt and is another all out struggle with a beaten loser. Both these matches were for real.
Then, athletic Jim, in a black posing brief, challenges Spice in two separate matches. In the first match Spice dons a blue bikini and gives the larger Jim a run for his money.  The verbal taunts are almost as fierce as the match and you won't find a phony ending as most mixed matches show.  This one really happened.
A rematch was soon arranged and Spice went to the mat in a beautiful red one piece suit. This match became more than a physical wrestling match and Jim was intent on putting Spice in her female place.  In fact Jim really pre-occupied Spice and at times she forgot she was in our ring. The match is more of a confrontation of cocky male and self-assured female.  The question is does the winner really win?  Or does the loser really accomplish what he or she started out to prove?  A spectacularly different match of two strong personalities.