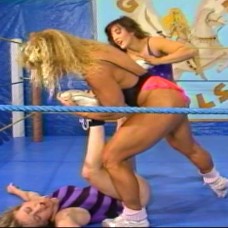 If you yearn for the gutsy action of Pro's, served straight with close in camera work and the sounds of combat instead of distracting commentary, GOLDEN GIRLS has it covered.  Sally (MISS 1989 U.S. MARINE CHAMPION BODY BUILDER), Holly, Cheryl (a petite sculptured body builder), and Chris are clad in boots and pro style outfits.  These four beautiful wrestlers square-off in an anything goes battle royal.  Witness the pain and indignity suffered by Holly and Cheryl as they apply scissors holds, body slams, figure four leg locks, drop-kicks and many other agonizing holds.  Soon one wrestler is defeated, leaving the strongest to gang up against one, beginning a segment of domination which turns into two beautiful ladies (Sally and Cheryl) in peak condition going toe-to-toe in a no hold barred show-down.  Sally's  body strength is amazing and Cheryl's tenacity is equally awesome.  The conqueror adds a surprising twist to the end of this match which you can not miss.