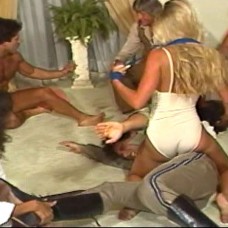 This sexy match has our "California Girl" blonde Robin taking on two separate men in a mixed maul.

(The complete movie "below" is available on DVD or Blu-Ray at www.goldengirls.net )

GGC-40   "FIGHTING FANTASIES"   (51 minutes)
First newcomer and curvy Jill slops it out with Leslie in our outdoor mudpit and later in the DVD they return in a catfight rematch.
Next, our two raven haired beauties, Elsa and Vicky battle in an apartment catfight and are interrupted in their destruction derby by a male intruder, who ends up having to wrestle both beauties at once. Vicky tries her best, but she can't keep her breasts contained in her sexy negligee.
The third match has our "California Girl" blonde Robin taking on two separate men in a mixed maul.
In the final scene, Jill and Leslie get in a heated catfight. The door bell rings and Spice enters thinking she is coming to a party but is tricked into going outside by the mud pit. As usual, her mouth gets the best of her and soon an argument erupts. The girls at the party have had enough and want revenge. Spice is forcibly thrown, fully clothed, into the mud pit.
This DVD has a vast variety of matches and should satisfy everyone's taste.